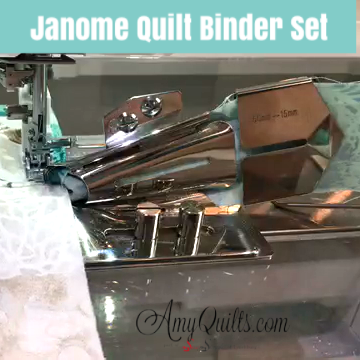 The Quilt Binder Set is the perfect accessory for quick and trouble-free binding, with a superior design based on industrial binding attachments. The cone on the front of the fabric holder feeds and folds fabric for a ½" finished binding. Two upper screws on the binding allow you to adjust the fold of the fabric so it lies where you want it; evenly on the front and back or further in on one side or the other (like more on the back when using a straight stitch to make sure you catch both edges of binding.)

Attachment comes with attachment screws and sewing foot. Amy has found that the binder attachment works well with the narrow Acufeed Flex Foot.

There are two versions, 7mm and 9mm stitch width versions, but it's also based on the bobbin cover as well. See each version's listing for machine model listings.